Perhaps the most often asked question/comment that I get is — “Why don’t you switch over to a more frugal car?”

Here’s their case. I’ve driven the Swift 60,000+ kilometers. The fuel efficiency that I’ve always got is 10 kilometers per liter (the rev line was breached on day one but because of that the car’s performance is a dream today). So, back of envelope calculations suggest a burning of 6,000 liters of petrol. At an average of Rs 65 — 70 per liter of petrol over the past 3-years, that directly translates to a burning of Rs 400,000 in cash! Wow! One more year and I’ll have crossed the purchase cost of the Swift itself. That is some achievement eh? 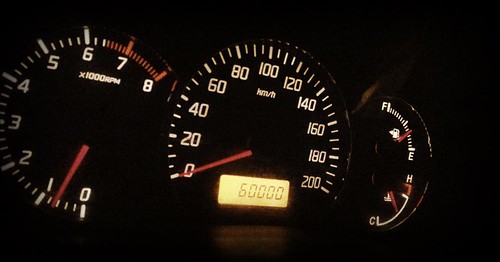 But assuming that I had a doubly efficient car that burned the cheaper cousin of petrol, I’d hypothetically have saved up around Rs 250,000 by now. At an assumed rate of interest of 9%, that would have translated to around Rs 2,000 per month in the form of interest earned. Those 2,000 Units of Freedom would most certainly have pushed me a notch up on the ERE-chart.

But then again, I’d for sure be 2,000 Units of Happiness less happier. I think it’d actually be much much more than that because I happened to meet D about a month after I bought the Swift (and no amount of financial freedom can replace that happiness). So, on the Units of Freedom vs. the Units of Happiness chart, I’d be free-er but unhappier.

In general, I believe this to be a tradeoff that each one of us seeking financial independence would have to make at one point or the other in our lives. Based on what’s important to you, you either choose the freedom path or the happiness path. In my case, with respect to the Swift, I chose the happiness path which is why I spend a bunch on petrol each month without blinking an eye. That’s also why I have no current plans to switch to a more frugal car. I simply don’t wish to be less happier.

There, I just had to get that rant off my chest. Thanks for your patience in reading to this point. But have you ever had to make a similar choice before? If so, what did you choose?

2 thoughts on “Units of Freedom vs. Units of Happiness — Why I Haven’t Switched To a Frugal Car?”