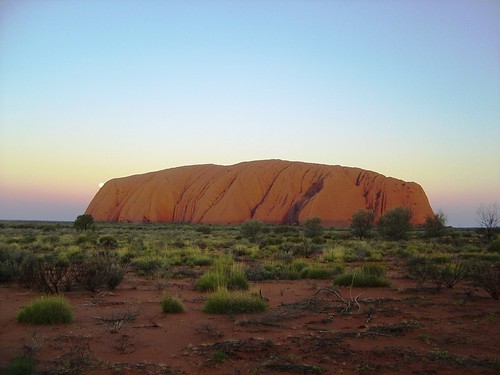 Source: Uluru and the Olgas

Live observations from the author:

The Lonely Planet guide asks punters not to climb Uluru, as it’s a sensitive site for aboriginals, there’s even a sign from the local aboriginal people asking that tourists respect their wishes and keep off. But oh no, try and stop Mr. Johhny Foreigner with a camera from climbing Ayers Rock and you’ve no chance. I’ve photographed the sign asking people to keep off, it couldn’t be any clearer.

But alas, the steady lines of Japanese, American, and European fat-arses never ceased from climbing over the “No Entry” signs, even past the warning about $5000 fines for climbing when the climb was shut (as it was this day due to high winds on the summit). I read this sign and realised that the aboriginal people were basically begging people not to climb, it was only closed due to high winds this day and the aboriginal sign is a request, not an order, but still the bastards went up and down. Aren’t people in general just dickheads?

Uluá¹Ÿu, also known as Ayers Rock, is a large sandstone rock formation located in the Northern Territory of central Australia. It is found in the Uluá¹Ÿu – Kata Tjuá¹¯a National Park, 335 km (208 mi) southwest of Alice Springs, 450 km (280 mi) by road. Uluá¹Ÿu is sacred to the Pitjantjatjara and Yankunytjatjara, the Aboriginal people of the area. It has many springs, waterholes, rock caves and ancient paintings. Uluá¹Ÿu is listed as a World Heritage Site for its natural and man-made attributes.

This is one rock I wish to see in my lifetime.