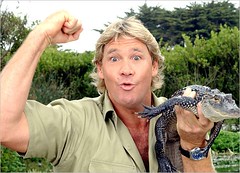 Steve Irwin, the crocodile man, who went to great depths to spread awareness about Nature’s creations succumbed to one among such Nature’s creations, the stingray. Irwin was killed by a stingray while filming a documentary at the Great Barrier Reef off Australiaâ€™s northeast coast. From what I read,

It’s ironic that Steve Irwin happened to be one such victim. It’s a BIG loss to humanity. I have enjoyed every moment of his often aired documentaries.

Here’s a tribute to a legend and an undying spirit.

One thought on “Nature’s Irony”